This songs has been heard live by 680 users. 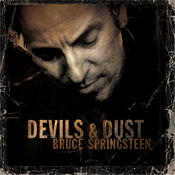 Rainey Williams' playground was the Mott Haven streets where he ran past melted candles and flower wreaths, names and photos of young black faces, whose death and blood consecrated these places. Rainey's mother said, "Rainey stay at my side, for you are my blessing you are my pride. It's your love here that keeps my soul alive. I want you to come home from school and stay inside."

Rainey'd do his work and put his books away. There was a channel showed a western movie everyday. Lynette brought him home books on the black cowboys of the Oklahoma range and the Seminole scouts who fought the tribes of the Great Plains. Summer come and the days grew long. Rainey always had his mother's smile to depend on. Along a street of stray bullets he made his way, to the warmth of her arms at the end of each day.

Come the fall the rain flooded these homes, here in Ezekiel's valley of dry bones, it fell hard and dark to the ground. It fell without a sound. Lynette took up with a man whose business was the boulevard, whose smile was fixed in a face that was never off guard. In the pipes 'neath the kitchen sink his secrets he kept. In the day, behind drawn curtains, in Lynette's bedroom he slept.

Then she got lost in the days. The smile Rainey depended on dusted away, the arms that held him were no more his home. He lay at night his head pressed to her chest listening to the ghost in her bones.

In the kitchen Rainey slipped his hand between the pipes. From a brown bag pulled five hundred dollar bills and stuck it in his coat side, stood in the dark at his mother's bed, brushed her hair and kissed her eyes.

In the twilight Rainey walked to the station along streets of stone. Through Pennsylvania and Ohio his train drifted on. Through the small towns of Indiana the big train crept, as he lay his head back on the seat and slept. He awoke and the towns gave way to muddy fields of green, corn and cotton and an endless nothin' in between. Over the rutted hills of Oklahoma the red sun slipped and was gone. The moon rose and stripped the earth to its bone.