This songs has been heard live by 4290 users. 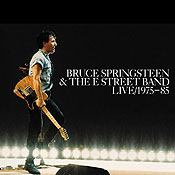 We told each other that we were the wildest, the wildest things we'd ever seen
Now I wished you would have told me I wished I could have talked to you
Just to say goodbye Bobby Jean

And you'll hear me sing this song
Well if you do you'll know I'm thinking of you and all the miles in between
And I'm just calling one last time not to change your mind
But just to say I miss you baby, good luck goodbye, Bobby Jean

Attention! The YouTube videos below are automatically generated. It is possible that not all videos belong to this song Bobby Jean belong.