This songs has been heard live by 760 users. 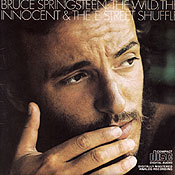 The machinist climbs his ferris wheel like a brave
And the fire eater's lyin' in a pool of sweat, victim of the heatwave
Behind the tent the hired hand tightens his legs on the sword swallower's blade
And circus town's on the shortwave

The runway lies ahead like a great false dawn
Fat lady, big mama, Missy Bimbo sits in her chair and yawns
And the man-beast lies in his cage sniffin' popcorn
As the midget licks his fingers and suffers Missy Bimbo's scorn

Whoa, and a press roll drummer go, ballerina to and fro
Cartwheelin' up on that tightrope with a cannon blast lightin' flash
Movin' fast through the tent Mars bent, he's gonna miss his fall
Oh God save the human cannonball.
And the flying Zambinis watch Margarita do her neck twist,
And the ringmaster gets the crowd to count along: "Ninety-five, ninety-six, ninety-seven"
A ragged suitcase in his hand, he steals silently away from the circus grounds

And the highway's haunted by the carnival sounds
They dance like a great greasepaint ghost on the wind
A man in baggy pants, a lonely face, a crazy grin
Runnin' home to some small Ohio town
Jesus send some good women to save all your clowns

And circus boy dances like a monkey on barbed wire
And the barker romances with a junkie, she's got a flat tire,
And now the elephants dance real funky and the band plays like a jungle fire

Circus town's on the live wire
And the strong man Sampson lifts the midget little Tiny Tim way up on his shoulders, way up
And carries him on down the midway past the kids, past the sailors
To his dimly lit trailer
And the ferris wheel turns and turns like it ain't ever gonna stop
And the circus boss leans over, whispers into the little boy's ear "Hey son, you want to try the big top?"
All aboard, Nebraska's our next stop.